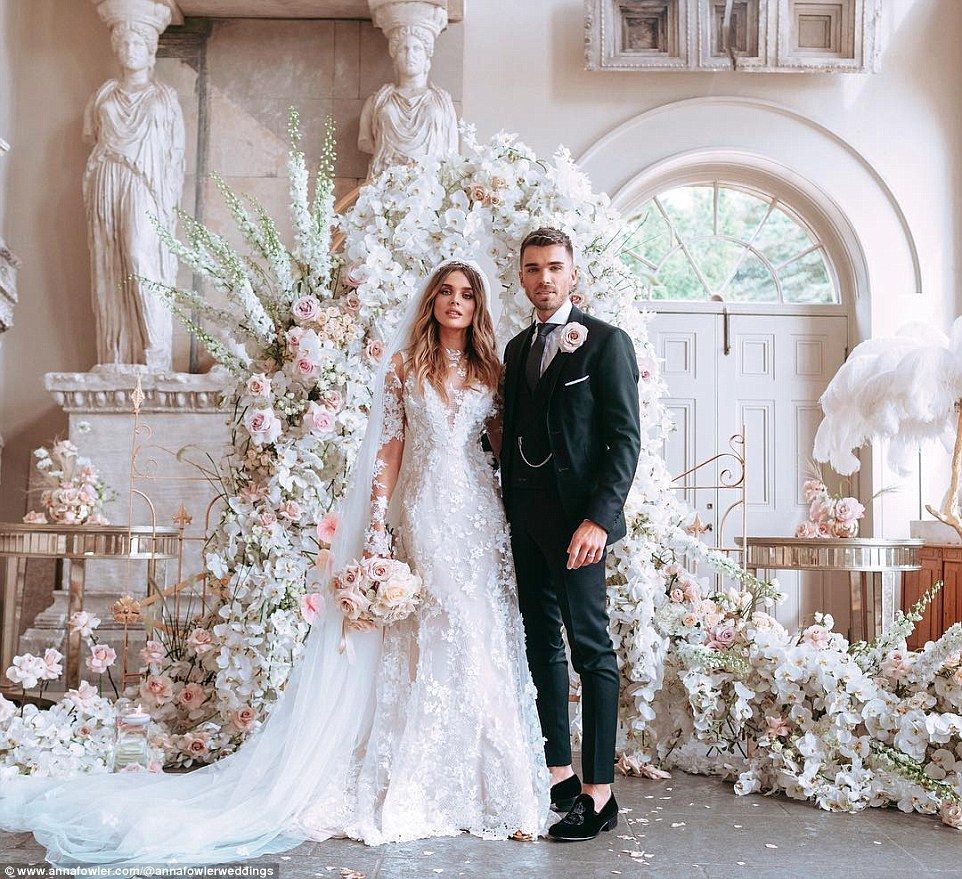 We’ve been taking wedding inspo from the rich and famous for years. Even before Instagram and hello magazine deals, we were looking to celebrities for inspiration. Did you know the reason we wear white wedding dresses is that Queen Victoria did in 1840? Clearly, she was quite a trendsetter. These days, we’re much more likely to take inspiration from Ex-Islanders, Pop Stars and models, but while some weddings feel miles away from our own, take inspiration from celebrity weddings?

In this article, I’ve identified ways of stealing elements from famous celebrity weddings. Some of the weddings have followed trends, some have set them, and some have had an influence for years to come. So let’s start. From Queen Victoria to another Queen V:

Arguably one of the most memorable weddings of recent times, Victoria married David Beckham in Ireland, in 1999. If you didn’t know the year, you could probably guess it from the photos. One of the most iconic images, which people to this day refer to, is their king and queen thrones. I personally hate them, but I do think they started a movement of thrones at weddings which have now developed into Peacock chairs. I LOVE peacock chairs. They’re a bit boho, but still a chic way of identifying the bride and groom seats without being too OTT. They also make a great photo op. 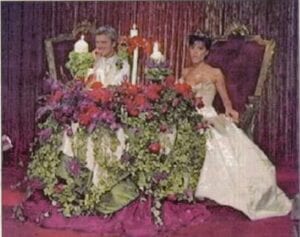 SO many people sit on the fence about Mandy Moore’s 2018 wedding, mainly because she chose a lacey pink number which is a bit fluffy. But that’s not my focus here, my focus is on the aisle lined with pampas grass. We’ve seen a lot of pampas grass in the last few years, but Mandy Moore optimised how to do it well for me. Creating floor standing arrangements as she did would be surprisingly cost-effective. I would use a similar look for the top of the aisle, creating a textured beauty of a backdrop to your ceremony. 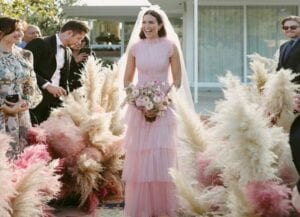 In my opinion, Kate Moss’s wedding dress epitomises cool. In reality, you probably wouldn’t expect anything less from the supermodel. Often sheer dresses can be met with immediate visualisation of tacky cut out side panels. Ms. Moss shows us how you can pull off sheer with poise and grace. To me, it’s the perfect balance of edgy and elegant. Wedding inspo central. 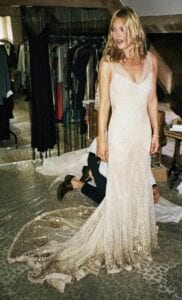 Important note – I don’t follow the Kardashians, I don’t know anything about them, and it would take me a while to name all of them. It was hard to avoid Kim’s wedding to Kanye West in 2014. In true Kardashian style, it was plastered everywhere. It’s the first wedding I can remember really focussing on the flower wall. The shot below is probably the most famous from their wedding, and I think it was the start of the flower wall craze. Now, you can rent flower walls from as little as a few hundred pounds. They’re incredibly easy to find, just join your local wedding suppliers Facebook group. 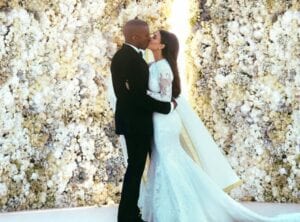 Firstly, their last names. They are Mr. and Mrs. Lloyd-Cuthbert. I love that they barrelled their names and put Chloe’s first. It just shows you can really do what you like with your last name, and the old tradition of straight-up taking your partners name is outdated. That’s if you don’t want it of course.

Anyway, I’ll have to control myself here because I would literally have Chloe Lloyd’s life if I could… hair goals. Her florals. Her arch by All For Love Flowers is to die for, and a brilliant example of how to create an impact. If you don’t have Chloe Lloyd’s budget, because let’s face it The Sun aren’t paying for all our weddings, use the same tactic. Think about an area where people are going to spend the most time. There’s no point in spending tones of money on something people will see for 30 seconds. 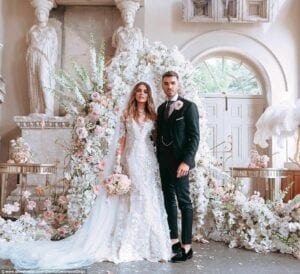 Billie Faires wedding was quite a similar vibe to Chloe Lloyd, but my focal point for wedding inspo is very different. I am still not over how beautiful she looked with her sister Sam, both in white dresses. Bridesmaids being banned from wearing white is again a thing of the past, and the pictures below show exactly why this is such a good idea. 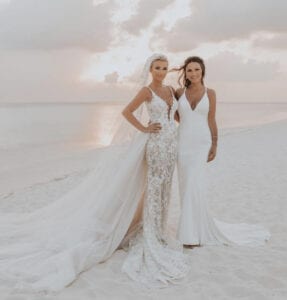 Bovey Castle in Dartmoor hosted the wedding of Tom Daly and Dustin Lance in 2017 at their estate near Dartmoor. Set in 275 acres of beautiful countryside and rolling valleys, Bovey Castle is a truly unforgettable wedding venue. With a capacity of up to 130 and a multitude of spaces to chose from, it’s clear to see why Tom and Dustin chose this beauty. It’s also in such a beautiful part of the world, you’ll particularly agree with me if you’re from a big city. 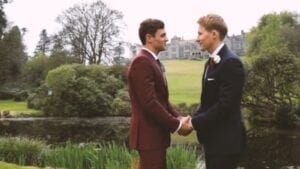 KC2 married in 2018, in a wedding which even over social media you can tell was super personal to them. They had tequila shots for favors, photos taken in the stables, and my favorite part, they bought their dogs. Tank is the true star of the show as this picture continues to circulate. If you’re anything like me and you love your pets, make them part of your day too. Only if they’re well behaved that is. If they’re terrors it might be better to leave them at home! 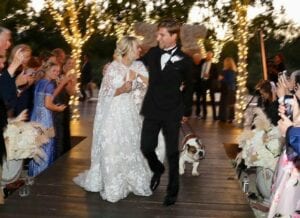 Taking you back to 1969 here, when John Lennon and Yoko Ono got married in Gibraltar after many hiccups. They originally wanted to get married on a ferry, then in Paris, but that’s a story for another day. Instead of a honeymoon, John and Yoko held a “bed-in”, a non-violent protest against the Vietnam war. Now an incredibly iconic image, at the time this stirred up a lot of media attention. I’m not suggesting that you stage a protest instead of going on your honeymoon, but I am suggesting that you do some good if you can. If you’ve got all the toasters you need, perhaps consider asking people to make a donation to charity. You could get your favors from somewhere which supports small business, or it could be as simple as taking your flowers to a local hospital when you’re done. 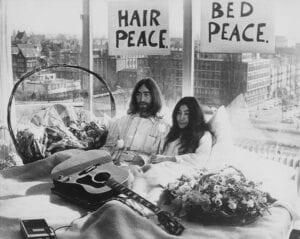 I’m looking forward to seeing what the next year of celebrity weddings brings up, and if anyone does choose to go for a Vicky B style throne as a result of this article. There are ways of taking wedding inspo from everywhere, but that doesn’t mean you have to carbon copy. As I said from the start, not all of us can have weddings sponsored by Hello, but we can all feel like celebrities for a day. So I hope you were able to take some wedding inspo of your own from this article, let me know if you did!

Want to talk more weddings? Sure! Get in touch. 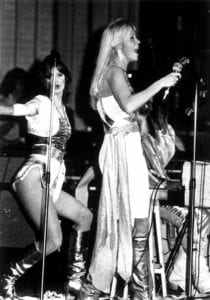